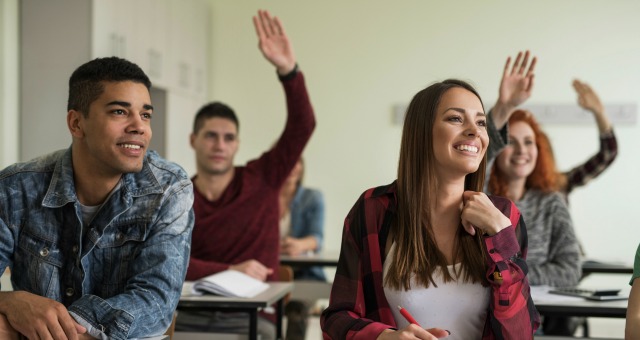 Engagement. . .it’s another one of those words that’s regularly bandied about in higher education. We talk about it like we know what it means and we do, sort of. It’s just that when a word or idea is so widely used, thinking about it often stops and that’s what I think has happened with engagement.
Tags:

It’s Not Them, It’s You: How to Write Small Group Active Learning Prompts That Actually Work
Megan McNamara and Aaron Zachmeier September 19, 2022

It’s Not Them, It’s You: How to Write Small Group Active Learning Prompts That Actually Work

Another Year, Another New Normal

Magna Publications © 2022 All rights reserved
Engagement. . .it’s another one of those words that’s regularly bandied about in higher education. We talk about it like we know what it means and we do, sort of. It’s just that when a word or idea is so widely used, thinking about it often stops and that’s what I think has happened with engagement. We know that engagement is an essential part of learning. For years, folks have correctly pointed out that the term “active learning” is redundant. When learning’s the game, you’ve got to be on the field, actively engaged. No sitting on the sidelines. We aren’t like plants, if you can stand another metaphor. We don’t get much by osmosis, but must instead rely on effortful acquisition for the knowledge and skills we need.

We aspire to get our students engaged because most of them don’t come to us that way. Our first (and often default) strategy is participation. We believe if we can just get students talking in class, they’ll be engaged. It’s that part of our thinking that merits a revisit. In the April issue of The Teaching Professor newsletter, I highlighted research that explores the participation-engagement relationship. It’s a complicated, two-study design with most of its eight hypotheses and three research questions confirming this conclusion: “oral participation is not a good indicator of engagement.” (Frymier and Houser, p. 99) The findings do not indicate that participation is a bad thing or that it can’t engage students, just that it didn’t do so very convincingly for this cross-disciplinary cohort of more than 600. What the research team found did indicate engagement was something they call “nonverbal attentiveness.” It’s associated with behaviors like frequent eye contact, upright posture, seat location (closer to the front than the back), note taking, and positive facial expressions. In other words, silent students can be engaged and perhaps even more so than some who participate. We tend to think that either students are engaged or they aren’t. In fact, engagement varies in intensity and duration. It “can be short term and situation specific or long term and stable.” (Fredricks, et. al., p. 61) It can be measured at different levels as well. The National Survey of Student Engagement (NSSE) gauges it at an institutional level—the extent to which a large cohort of students is engaged in the experiences that constitute post-secondary education at their institution. Other measures can be used to assess the involvement of an individual student in a course, a program, or at the institution. In reading more about engagement, I’ve discovered that it’s a multidimensional construct—the academic way of saying it’s composed of parts. Most of the research has focused on three aspects: behavioral engagement, emotional engagement, and cognitive engagement. Although these parts of engagement can be defined separately, they don’t function that way. They are “dynamically interrelated within the individual.” (Fredricks, et. al., p. 61) Think a fusion of forces directing the student’s learning processes. What’s not yet been sorted out are the relationships between these parts of engagement; how exactly it is they work together. Furthermore, engagement interacts with related aspects of learning, such as motivation and self-efficacy, and those connections are also not well understood. However, the general consensus is that engagement is “malleable.” It responds to external forces, such as the classroom climate in a course, and that leads us to the question of greatest interest to teachers. What teacher actions or interventions promote more and deeper student engagement? We’ll work on that question in the next post, but we’ll do so with a new perspective of what student engagement really means. It’s not all that cut and dried, not the automatic outcome of student interaction, and not an aspect of learning that works in isolation. References: Frymier, A. B., and Houser, M. L. (2016). The role of oral participation in student engagement. Communication Education, 65 (1), 83-104. Fredricks, J. A., Blumenfeld, P. C., and Paris, A. H. (2004). School engagement: Potential of the concept, state of the evidence. Review of Educational Research, 74 (1), 59-109.