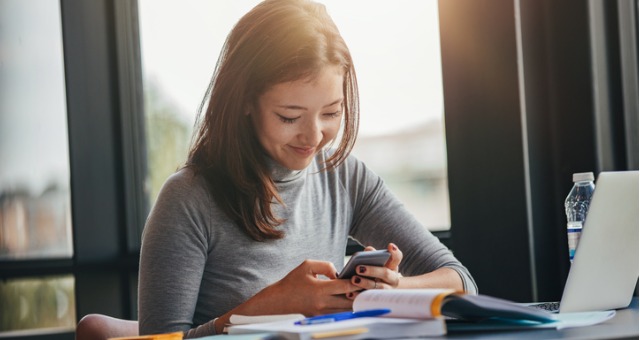 The amount of multitasking students do during class and while studying is alarming. Consistently, in response to surveys, more than 85% of students say they have their phones on in class, are looking at texts as they come in and during class, and between 70 and 90% say they respond to texts in class. And this is happening in courses with policies that prohibit or significantly curtail the use of electronic devices.
Tags:

Confronting the Myth of Multitasking: A Collection of Tools and Resources
Maryellen Weimer March 6, 2018

The Science of Learning Can Improve Teaching
Maryellen Weimer March 2, 2018

An Update on Media Multitasking

Magna Publications © 2022 All rights reserved
The amount of multitasking students do during class and while studying is alarming. Consistently, in response to surveys, more than 85% of students say they have their phones on in class, are looking at texts as they come in and during class, and between 70 and 90% say they respond to texts in class. And this is happening in courses with policies that prohibit or significantly curtail the use of electronic devices.

What we’re seeing in class also happens when students study outside of class. There it is most often a case of task switching (toggling between separate tasks, attending to each independently for a short period of time). In one study where students were observed for 15 minutes, they were only on task (that is, studying what they were supposed to be studying) 65% of the time. In another study where a three-hour study period was carefully monitored with camera and eye tracking devices students were distracted by media unrelated to studying 35 times. The research is just as clear and consistent as to how effectively both task switching and multitasking compromise learning outcomes. Students who use devices when they study and/or when they’re supposed to be listening, perform less well on tests given in laboratory situations, on quizzes and course exams, and they receive lower course grades overall. Having assembled a large collection of research data, I’ve been working to create a resource that faculty could share with students. Surely, if students knew how these devices were lowering their grades and diminishing their learning they would change their behavior. However, shortly after completing the first draft of the resource, I discovered two new studies (Tassone, Liu, Reed and Vickers, online and in press in Active Learning in Higher Education and Terry, Mishra and Roseth, 2016) where educational interventions failed to change students’ behavior. Terry, et.al sent students in the experimental group a series of texts with information about the effects of multitasking. The Tassone group had those in the experimental group watch a PowerPoint presentation that contained information on the detrimental impacts of multitasking. Both of these interventions precipitated the same amount of change, as did the sharing of unrelated information or no information. Some of the results reported in these studies are astounding. In both cases, in response to direct questions about the effects of multitasking, students were fully aware of the potential harms. They believed that their grades would improve if they paid better attention in class and the majority reported that they were motivated to improve their grades. But apparently not motivated enough to turn their phones off. The Terry, et. al. team found some indication that what’s keeping the phones on is the high anxiety students feel when they’re off and how dependent they have become on these devices. I suspect that problem is not exclusive to students. I’m too much of a believer in education to back off from educational interventions just yet—so that resource I mentioned above will be coming your way soon (and it has references to the studies in the opening paragraphs). Information about the harmful effects of smoking, poor nutrition, and a sedentary lifestyle has changed people’s behavior, not across the board, but still pretty dramatically. However, experiences in changing those behaviors and this research on the failure to change students’ cellphone behavior provides a clear indication that change isn’t always easy and doesn’t happen quickly. Perhaps text messages and PowerPoint slides weren’t the best approaches for teaching students about the evils of multitasking. Maybe the educational message needs to be better tailored to the students. In the Tassone, et. al. study, it was the students who believed they could never multitask and pay close attention to the lecture who reduced their multitasking behavior the most in response to the intervention. We still have lots to figure out, but we can’t give up or abandon our efforts. Learning is at stake here. Fortunately, we’re in this together and can learn from each other. For more in multitasking, read: References: Terry, C. A., Mishra, P., and Roseth, C. J. (2016). Preference for multi-tasking, technology dependent, student metacognition & pervasive technology use. Computers in Education, 65, 241-251. Tassone, A., Liu, J., Reed, M., and Vickers, K. (2017). Multitasking in the classroom: Testing an educational intervention as a method of reducing multitasking. Active Learning in Higher Education, in press (currently available on the journal website). Examples of work documenting the extent of multitasking Junco, R. and Cotton, S. (2012). No A 4 U: The relationship between multitasking and academic performance. Computers & Education, 59, 505-514. Patterson, M. C., (2017). A naturalistic investigation of media multitasking while studying and the effects on exam performance. Teaching of Psychology, 44 (1), 51-57. Tindell, D. R. and Bohlander, R. W. (2012), The use and abuse of cell phones and text messaging in the classroom: A survey of college students. College Teaching, 60, 1-9. Students on task 65% of the time during a 15 minute study period Rosen, L. D., Carrier, L. M., and Cheever, N. A. (2013). Facebook and texting made me do it: Media-induced task-switching while studying. Computers in Human Behavior, 29, 948-958. Students distracted 35 times during three-hour study period Calderwood, C., Ackerman, P. L., and Conklin (2014). What else do college students “do” while studying? An investigation of multitasking. Computer & Education, 75, 19-29.