How Superheroes Can Bring Your Discussion Board to Life

How Superheroes Can Bring Your Discussion Board to Life

Late last summer we set the goal to liven up our discussion boards. We wanted a forum that encouraged diverse points of view, student questioning, and respectful debate. We did so by creating the gamified discussion board called Discussion Hero. Discussion Hero has students adopt either hero or villain roles and earn points for their posts based on the performance within the assumed role. This allows students to compete with one another to reach a higher status on the leaderboard, fostering motivation and engagement.
Tags:

How to Welcome Students to an Online Class
John Orlando January 18, 2022

How to Welcome Students to an Online Class

Magna Publications © 2022 All rights reserved
[dropcap]L[/dropcap]ate last summer we set the goal to liven up our discussion boards. We wanted a forum that encouraged diverse points of view, student questioning, and respectful debate. We did so by creating the gamified discussion board called Discussion Hero. Discussion Hero has students adopt either hero or villain roles and earn points for their posts based on the performance within the assumed role. This allows students to compete with one another to reach a higher status on the leaderboard, fostering motivation and engagement. How Discussion Hero works To get started with Discussion Hero, the teacher first identifies a discussion topic or topics. Students then choose an avatar and role from lists made available in a questionnaire given to them at the beginning of class. There are currently only two roles: hero and villain. Students are provided with general descriptions of how each might behave to guide their responses and are then free to create their own variations within those roles. Next, students post a response to the discussion board within their role. Heroes start by stating their position(s) and providing support for them. But heroes cannot exist without villains—adversaries that challenge heroes, making them stronger with each confrontation. Villains play a very necessary role in creating rich and dynamic discussions. The villain may take a controversial position on a topic or just a different perspective. Villains may be mischievous or simply take on the “devil’s advocate” role as they debate the hero, questioning their assertions while providing counter information and supporting evidence. One example of student engagement with Discussion Hero occurred during the latest iteration in an online graduate course called Effective Communication. Students participated in the Discussion Hero activity in week two, and were asked to discuss five dimensions on which an audience can be analyzed. One student took on the persona of Darth Vader. Throughout the discussion the student used villain terms related to their character (“dark side,” “force”) when challenging other students’ posts or asking questions. The student applied their character’s values on each topic.  For example, Darth wrote, “Allied, but not the Rebel Alliance. My workforce must be in 100% agreement with me in order for us to work together to achieve a win. Any doubts, discontent or weakness will not be tolerated. With building projects as large as the ones I manage, everyone must be of one (dark) mind.” Even while writing through the eyes of “Darth,” the student managed to stay on topic and apply the concepts with a fresh, entertaining, and exciting viewpoint. In response, a hero called “Constructo” countered, “Hello Lord Vader, while I am certain that your communication approach has served you well (evidenced by the massive death star that you own), I might suggest you try easing up on the demands and need for absolute loyalty and subservience. You might find that with a little freedom your followers might come to you with some inspiring ideas, like not building a death star with such obvious vulnerabilities. Remember that you too once weren’t always so dark. Maybe there’s a little light inside that could help take your goals of domination to the next level? I will be on my way now, I mean you no disrespect... wait, what are you doing? I can’t breathe! I was just trying to be constructive! Give me another chance Lord Vader! I am sorry for being insubordinate! It will never happen again I promise!” This little piece of banter proves that not only can students give insightful commentary, but they can do it while still having fun. Scoring As the discussion develops, students are rated using a five criteria rubric which scores the frequency of their posts, the quality of their initial post, responses from other students, (i.e., how much their activity drives the discussion), post content and references, and mechanics, such as spelling and grammar. While some of these criteria require the teacher to manually rate them, others will be automated with simple programming algorithms in planned future versions of the activity. Currently, a scoring spreadsheet is used to input values and generate a percentage rating for each student. This rating is then used to update the leaderboard. The default Discussion Hero rubric and scoring spreadsheet are shown below. 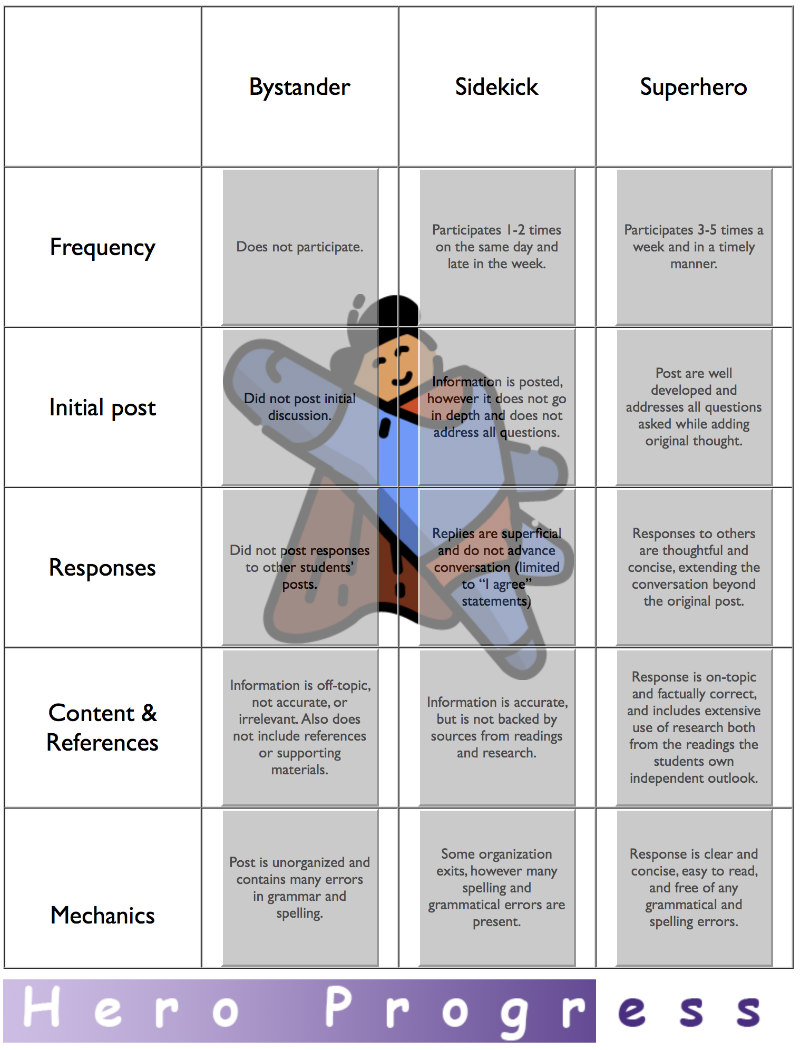 The leaderboard shows students in groupings by hero or villain. Ratings are given by hero and villain token symbols, each of which represents 10 percent of the total possible score. As students receive more tokens on the leaderboard, their status increases until they have received 10 tokens, at which point they have reached either Superhero or Supervillain status, depending on which role they chose. Students then receive digital badges with their hero or villain status level at the end of the activity.

Results Discussion Hero was piloted in David Noffs’ course in the spring of 2018. The results were extremely positive. Compared to the previous discussion, there was a 26 percent increase in participation, with many students taking roles that were different from what they normally would assume, i.e. most students actually asked to take on villain roles. When surveyed, students returned an overwhelmingly positive response. Sixty-seven percent of respondents claimed they were motivated to participate more than in a regular discussion, and more than 90 percent of the class said they would like or be willing to use the activity in other courses. Many students stated that the role of the villain made them feel comfortable enough to state ideas they may have otherwise kept to themselves. One student stated that, “In choosing a villain, I felt a bit more comfortable making pointed statements without seeming overly critical.” Still others said that they, “... enjoyed the low risk, competitive aspects.” Another commented that, “I loved the leaderboard, it was really inspiring and motivating for me!” And yet another student stated that, “I think the argumentative nature made the discussion posts more entertaining and interactive.” Despite the positives, however, challenges still lie ahead. One student refused to participate because it was not “adult” enough, and others bemoaned the lack of instant gratification (it still takes manual updating of the leaderboard until programming is completed). Still others said they would like to see more flexibility in their roles. But despite these obstacles, Discussion Hero has come a long way in a short time to shake up discussions at Northwestern University. David Noffs and Jacob Guerra-Martinez are learning designers at the Northwestern University School of Professional Studies.