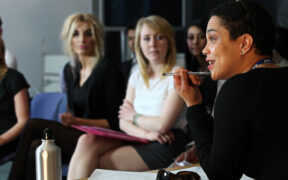 From the Print Archive, Participation and Discussion
Finding the Discussion Question That Works
Joe Reese November 1, 2021

I’ve been teaching literature for more than 30 years, and nothing has struck me more during that time than the difficulty of finding just the right discussion question. It’s easy to give out information, which ...

I’ve been teaching literature for more than 30 years, and nothing has struck me more during that time than the difficulty of finding just the right discussion question. It’s easy to give out information, which students dutifully take down in notebooks and throw away after the test. It’s not even that hard to do a kind of modified Socratic dialogue, in which you stand in the middle of the classroom and elicit one- or two-sentence responses (you pretty much know these responses beforehand) from select, eager students that you continually call on.

But these are not discussions. Discussions are freewheeling, bothersome, hard-to-predict, time-consuming animals that a great many teachers don’t like. Real discussions don’t always fit with what’s in the syllabus or planned for class—they just grow, evolve, get out of hand, and sometimes mutate.

Frequently you can’t even get them started. And you aren’t helped very much by textbooks suggestions. “Analyze Hamlet as an individual.” “Are there people like Ophelia in your dorm?” “Why aren’t they popular?” (I’m not kidding; I’ve seen these suggestions in print.)

There are questions, though, that work. They initiate actual, text-related argument. They energize students. They work on all students, not just the ones who know they need to discuss in order to impress the teacher. Every experienced teaching who truly likes discussion collects these questions. There are a great many of them out there, and I would love to hear other suggestions. Here, though, is my all time favorite: “Was Oedipus guilty?”

Five-minute wait. Finally, a student in the back with the baseball cap on backwards. “No. He’s fated to do it. I mean, like, to marry his mother and kill his father. The gods make him do it.” After only a one-minute wait, a female student up front responds, “Yeah but—he really does kill these people. And he’s stupid for marrying a woman that much older than he is.” From someplace else: “She’s still good-looking though.” Laughter. “I mean—he’s guilty because he’s crazy. He’s gonna kill the blind guy—what’s his name?” “Teiresias.” “Yeah, that.” Laughter again.

“He’s gonna kill that guy. And it doesn’t make any sense because he’s supposed to be smart.” Someone else. “But he’s not guilty because everything he does, he wants it to help people. He’s trying to help the Thebes people, even to find the killer in the first place.”

And so it continues for the entire class period (or maybe a lifetime, or even a millennium). You can make a trial scene out of it, with robed judge, district attorney, and defense counsel. You can have a jury. If that all seems too informal for the halls of academe, don’t do it that way. But any way you do it, the discussion will get livelier and livelier (as long as you let it breathe and don’t lead it too quickly where you want it to go—remember you don’t know where it’s going)—until it gets right to the heart of all that matters. It will lead to questions of divine omniscience, fate, predetermination, and even modern heroism in the face of disillusioning truths. And it will lead to more of those questions that make discussions happen!

This article originally appeared in the March 2005 print issue of The Teaching Professor. For more on this topic, see our spring 2021 special feature on the questions teachers ask students.