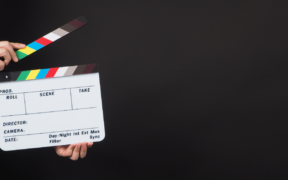 The digital storytelling video format (sometimes called “audio slideshow”) is one of the simplest, yet most powerful, formats for delivering online lessons. By combining imagery found on the web with the creator’s narration, it integrates ... 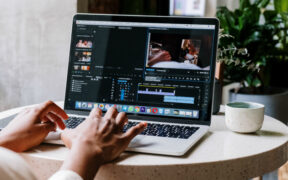 Millions of years of human evolution have molded our minds to learn through sight and sound, as written language is a relatively new means of human communication. When trying to figure out a process we ...

The digital storytelling video format (sometimes called “audio slideshow”) is one of the simplest yet most powerful formats for delivering online lessons. By combining imagery found on the web with the creator’s narration, it integrates two sensory modalities to promote greater understanding and retention than images or sound can achieve alone. Students can also use it to demonstrate their understanding of course topics. There are three basic ways to make digital storytelling videos: video editor, screencasting, and digital storytelling app. They differ in degrees of complexity and functionality. I compare the methods below.

My preferred method for creating digital stories is to first record the narration in a program such as Audacity and then import both the narration and image files into a video editor, where I then sync the images with my narration. This allows me to add text and shapes to the images to highlight areas, zoom in and out of images, and add transitions between them. It also makes it easy to edit the result later by replacing any of the content and reexporting it.

My preferred video editor is Camtasia Studio from TechSmith, a powerful, paid program that you downloaded to your computer. A simpler and less expensive alternative is the online WeVideo, which has pretty much all the functionality needed to create digital stories without the complexity of Camtasia Studio.

Screencasting is at the opposite end of the spectrum from video editing as it requires the least amount of technical know-how. Here the instructor or student uploads their images to a hosting system, such as Microsoft Photos or Google Photos, sequencing them as they will appear in the story, and then runs a screencasting program—such as Screencast-O-Matic, Screencastify, or Loom for Education—to record their voice narration and monitor while advancing through the images. There is no editing involved, and the only real technical skill required is the ability to use a screencasting app.

The downside of this method is that if you want to later change anything about the video, you’ll need to reshoot it. Likewise, if you make a verbal mistake during recording, you’ll need to start all over from scratch.

Between the extremes of video editing and screencasting are the dedicated video storytelling apps. These are simpler to use than video editors, and the results can be easily edited at a later time. All the work is done on a single app rather than across multiple apps. Plus, the apps are mobile friendly, making them good for students creating content for a class assignment. They can even make the video out in the field after shooting the photos. There are numerous digital storytelling tools available at little or no cost and that provide the perfect balance of functionality and simplicity for the average user.

Adobe Video is one of three apps in the free, online Adobe Spark suite. The user builds videos from a sequence of slides, similar to those used in PowerPoint or Google Slides. The user adds an image, audio, and any desired text or drawings to each slide; the system creates a seamless video from the result. One nice feature is the ability to record the slide audio from within the system. This allows the user to easily rerecord the audio if they make a mistake. The user also needs to make sure that each slide’s timing is matched to the length of its audio so that one scene transitions to the next without pauses or chopping off part of the narration. Users have the option of downloading the video as an MP4 file or leaving it on the site and sharing a link for others to view it. Take a look at this tutorial on how to make a digital story on Adobe Video.

Canva started as an exceptional online graphics editor for making image-based content, such as infographics, fliers, and brochures. But it continues to add functions, and now can be used to create digital storytelling videos in a way similar to Adobe Video. The user puts one image on each of a sequence of “pages”—essentially another term for slides. The user then uploads an audio file to each page, and the result can be downloaded or hosted on Canva’s site. The one major limitation is that pages can run for a maximum of only 30 seconds, meaning that to run without interruption, longer narrations must be cut into separate audio files and added to a sequence of duplicate pages.

Shadow Puppet Edu is a free app that allows users to create digital storytelling videos on their smartphones, tablets, or computers. As with the systems above, the user uploads photos and then records their voice as narration. I like the built-in image search function that scans sites such as the Library of Congress and NASA. Plus, the system automatically saves the citation credit for each image and lists all of them at the end of the video, which is a great way to help students learn about the importance of crediting sources in multimedia projects.

Microsoft Photos, the photo-hosting app that comes with Windows, has been upgraded to include a video editor. Essentially, Microsoft resurrected its discontinued Windows Movie Maker as a video editor add-on to Photos. A standout feature is the ability to add motion to images, having them slowly move across the screen in what is often called the “Ken Burns effect,” in reference to the documentary director who made it famous. Jamie Keet provides a good tutorial on how to use it.

These tools make it easy for instructors and students to make highly effective and engaging digital storytelling videos.