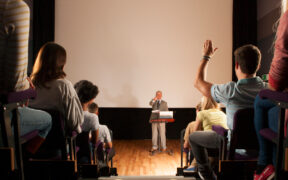 For Those Who Teach
What Students Say about Professors’ Politics
Maryellen Weimer March 21, 2022

We hear a lot about the unseemly influence of liberal professors and their inappropriate use of courses to promulgate left-leaning ideas. Some go so far as to claim that liberal teachers brainwash students. We can ...

We hear a lot about the unseemly influence of liberal professors and their inappropriate use of courses to promulgate left-leaning ideas. Some go so far as to claim that liberal teachers brainwash students. We can counter with evidence; a recent study offers plenty of it (Liebertz, 2022).

That more professors are liberal than conservative is indisputable, although the percentages do vary by discipline and region. A 2016 study (cited in the Liebertz article) uses history and economics as examples. The distribution of liberals and conservatives in economics is more balanced than the lopsided proportion of liberals in history. Another study (also cited) reported that in New England, liberal professors outnumber conservative ones by 28 to one.

In this research, Liebertz sought to “describe the extent to which students perceive that their professors are using their teaching opportunities to share personal political views and also the extent to which students feel that this is done in an inappropriate manner.” Over 500 students from across disciplines responded to a first survey, and a year later over 300 completed the same survey but with the added question about the propriety of message delivery. Students selected responses that ranged from “almost never” to “almost always.”

Contrary to claims made in the media and by some politicians, “the modal response to whether professors share political views was ‘almost never.’ Nearly 70 percent of respondents report that their professors engage in this behavior either ‘almost never’ or ‘occasionally, but not often.’” Nineteen percent reported that political views were shared “with some regularity” or more frequently. Liebertz describes this percentage as a “nontrivial minority.” A similar minority (23 percent) strongly or somewhat agreed that their professors presented their views in an unprofessional way.

Liebertz thought that perhaps Fenno’s paradox might apply. Fenno identified the paradox when studying the public’s harsh judgments of Congress but strong voting record in favor of their incumbent legislator. Students reported the same tendency: nationally, liberal professors foist their beliefs on students, but that’s not what professors at their school do.

Because his data was collected at one institution, Liebertz conducted a second analysis. He reasoned that certain fields in the humanities and social sciences tend to encourage or presuppose certain politics. Having identified a stratified random sample of 1,000 political science faculty from across the country, he looked their student reviews on the Rate My Professors website. Of the 770 professors who had reviews, only 62 professors (5.8 percent) of them received comments that complained about their political bias. Furthermore, a miniscule number of professors (four) accounted for a large proportion of the complaints (30 percent) that claimed bias.

These results are encouraging, and one would hope persuasive, although some students did report perceptions of bias. The research teases out a bit more about these students. Ideological variables, age, and field of study were all significant predictors when students reported bias. Related to concerns about these students is the larger pragmatic question of whether professors should say anything to students about their political beliefs. In terms of what faculty do, some reveal nothing. Some provide information if they are asked or if they cannot discuss the content without revealing their beliefs, and others are up front with their views. The instructional context matters, and because our teaching situations are so different, it’s hard to imagine a generic answer applying across the board.

We might be better advised to remember the position teachers occupy in their courses. Students look to us for leadership. What we say and do influences their thinking and not just about the content we teach. They respond to our personhood, what they think about us as human beings. Given that influence, what ethical responsibilities come with our leadership? We occupy a position of power that students recognize and most respect. Less powerful, they may feel the need to protect their position. If they question our objectivity about ideas, they will avoid saying what they think or announce the beliefs they think we want them to have.

We need to think carefully about the expression of beliefs whether it’s politics or a host of other controversial topics. On-the-spot decisions about what to say risk conveying messages we may later regret. But these findings do endorse our actions. Liebertz concludes with a reminder that the unwelcome politicking some students observe is not trivial. Even so, his results clearly indicate “that a more common experience for students is one in which professors conduct themselves as educators, not activists.”