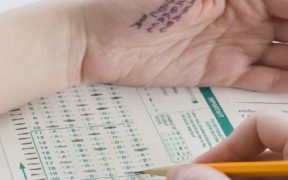 Cheating continues and is now regularly described by words and phrases like “rampant,” “epidemic proportions,” “out of control,” and “seriously alarming.” Especially troubling are findings that document a steady decline in the number of students ...

Cheating continues to be a pervasive problem in college courses. Institutions have policies designed to prevent it and faculty employ a range of strategies that aim to catch those who do. And still ...

Magna Publications © 2022 All rights reserved
Cheating continues and is now regularly described by words and phrases like “rampant,” “epidemic proportions,” “out of control,” and “seriously alarming.” Especially troubling are findings that document a steady decline in the number of students who consider cheating unethical. In a 2003 study, 92 percent found cheating unethical. This number declined to 64.1 percent in a 2016 analysis (both cited in the article referenced below). Historically, the reasons for cheating have included the need for high grades and/or to protect scholarship funding, the comforting sense that everybody's doing it and hardly anybody's getting caught, a failure to understand the role of academic integrity in the education enterprise, and the failure to realize that cheating most hurts the person doing it and that cheating in college predicts cheating in the workplace. More recently, cheating has been equated with self-entitlement, the sense of deserving something without having to do much or anything to get it. Would that orientation to learning make students more likely to cheat? Rafik Elias (2017) hypothesized that it would. The cohort he studied were all business students, 370 undergraduates (mostly upper division) and graduate students. Their ethical perceptions of cheating were measured with an instrument used by other researchers. Included on it were 16 different cheating actions. The business students recorded their ethical perceptions of each on a 1–7 scale. Student entitlement was also measured with a previously developed eight-item instrument. Students in the Elias (2017) study viewed in-class cheating actions “as significantly more unethical than outside actions, with an overall mean of 6.04 of 7.00.” “Obtaining papers from the web and turning them in as your work” was rated as the most unethical action (mean = 6.71, SD = .86). “Collaborating with others on assignments meant to be completed alone” was the least unethical, with a mean of 4.56 (SD = 1.60). Not all students viewed these cheating actions similarly. Women and older students in general viewed both in-class and outside-class cheating more unethical than men and younger students. Students with higher GPAs also rated the actions more unethical than students with lower GPAs. As was predicted, students (more males than females) who scored higher on the self-entitlement measure were “much less likely” to see cheating actions as unethical as compared with students who scored lower on the entitlement measure. But there was one rather surprising result: “Regarding academic entitlement, students had a low sense of academic entitlement, with a mean of 2.82 [on a 7-point scale, with 7 being the high end]” (Elias, 2017, p. 197). Another study (Luckett, Trocchia, Noel, & Marlin, 2017), highlighted in the March 2017 issue of the newsletter, also reports a low number of entitled students (6 percent of that cohort). Both of the studies were of business students, which prevents assumptions about the prevalence of self-entitled students in other disciplines, but as Elias (2017) notes, “these comforting results do not agree with anecdotal evidence and previous research showing the younger generation as significantly more entitled compared with older generations” (p. 198). Clearly more inquiry on the extent of student entitlement is needed. Is self-entitlement more prevalent among beginning students? Is it more widespread in some fields than others? Is it less of a problem now than it was when earlier research was completed? Is it seen more at some kinds of institutions? What's pretty clear is that automatic assumptions are not in order. It's not safe to assume that self-entitlement (or any other features) are characteristic of all millennial students. While teachers need to be prepared to address the issues associated with students who do feel entitled, it's probably not correct or fair to make those assumptions about the majority of students. However, the presence of any self-entitled students is problematic, and their lax attitudes about cheating are one of many reasons why. References: Elias, R. Z. (2017). Academic entitlement and its relationship with perception of cheating ethics. Journal of Education for Business, 92(4), 194–199. Luckett, M., Trocchia, P. J., Noel, M. N., & Marlin, D. (2017). A typology of students based on academic entitlement. Journal of Education for Business, 92(2), 96–102.