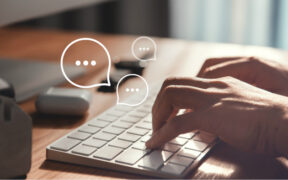 Too often, asynchronous online discussions morph into students making only perfunctory postings to fulfill the bare minimum requirements. We blame students, but the deeper issue is that the discussion forum is foreign to students because ...

Too often, asynchronous online discussions morph into students making only perfunctory postings to fulfill the bare minimum requirements. We blame students, but the deeper issue is that the discussion forum is foreign to students because real conversations aren’t planned. How often have you sat with colleagues at lunch, following the rule that each person must make one original comment and respond to a minimum of two other comments?

As an assistant dean of e-learning, I oversee over 200 instructors who teach master’s courses, so I see their uncertainty about how to engage students in online discussion. To resolve this problem, I placed myself in the perspective of an instructor. Teaching an online literature class last year, I achieved exciting results, proving that remote students do interact robustly when instructors prompt and model desired behaviors. This can be achieved through several easy steps.

Before the term began, I emailed my class to set the standard for discussion interaction, telling students that a good rule of professionalism was to respond to anyone who replied to their posts, even if they had already met the minimum number of required submissions. I explained that they should treat discussions not as assignments but hearty academic dialogues among growing scholars. Ignoring people, I said, was impolite, while acknowledging those who addressed them would permit the growth of their academic networks and lead to a greater sense of fulfillment. Through this approach, I treated students as active contributors to the academic community, and I informed them that rewards other than grades existed for interacting with each other.

The best practice is to reply to as many individual students as possible, presenting follow-up questions that extend the discussion’s prompt. In one discussion, I asked a student whether she thought the language in Hemingway’s August 18, 1918, letter to his parents had brought World War I to life through techniques such as onomatopoeia. The discussion prompt didn’t ask about literary devices, but wouldn’t a typical classroom conversation include a diverse array of topics? My student responded with examples of gunfire, bombs, and jets. When instructors are there, students respond.

Students notice their instructors’ activity in discussion boards. One day, I accidentally replied to every student but one. Quickly, she emailed me: “I’m concerned about Module 8. Do I not have a grasp of modernism? I see that you have posted a comment on everyone’s initial post this morning except mine—can you please give me feedback as to what I should relook at?” This was a fulfilling moment because I realized that she was reading my replies and actively learning.

What if you’re teaching a class of 35 students—or several sections of 35? Keep a list of which students receive your replies each week, and rotate who gets a response. An average of two posts per day, Monday through Friday, or 10 posts per week is a nice standard.

Successful grading feedback should guide the quality of students’ interactions with each other. For example, I told a student that she should brainstorm to get her classmates thinking and that perhaps she could offer an opposing perspective or ask a question. Prior to my suggestion, every sentence of her interactions began with phrases such as “I enjoyed” and “I agree,” but after my input, she began to promote critical thought in her classmates by asking, “Do you think . . . ?” and “How could . . . ?” This was a success story.

The results of teacher modeling are gratifying. One of my students learned from reading my replies that a useful discussion interaction was to ask questions that stimulate thought. Mimicking this technique, she asked her classmate, “Why do you think Faulkner made a point to go out of time in the story [“A Rose for Emily”]?” Although her classmate had already responded to two peers, meeting the assignment’s requirement, he took time to reply to this third post.

I observed my students learning and interacting with excitement in the discussions, where one of my students suggested that her classmate watch the Broadway production of a play on our reading list. Another student shared a link because her classmate’s post had reminded her of Maslow’s Hierarchy of Needs and she thought that he would enjoy the information. This is what we want: our students passionately sharing ideas, resources, and excitement for learning.

Even if the rubric doesn’t require students to post on multiple days, instructors can still encourage this as long as they don’t penalize when it doesn’t happen. After I told a student that she should reply to classmates later in the week to read more of their posts, she obliged in the next module, waiting four days between her initial post and her replies to peers. My effort was rewarded.

While it’s tempting to “support” students by not penalizing late initial posts, we actually do them a disservice by not creating boundaries that pull students into discussions when they’re occurring. They miss the discussion if they’re allowed to post at the last moment, and students will rise to the occasion to avoid a loss of points. By the end of my literature class, zero students were posting late in discussions because I was vigilant.

The following scatterplot shows the growth in my students’ interactions that semester—not their total number of weekly posts but the average number of their replies to classmates after initial submissions. During week one, most students supplied the obligatory two replies, but by week 13, the average was 3.5. This is because some students were responding to three, four, five, and even six classmates despite the rubric requiring only two replies.

The upward trend line shows that my students became more engaged as the term progressed. None of this would have happened if my students thought that I didn’t care—and if I wasn’t in the discussions frequently, holding them to a high standard. As dedicated instructors, we can guide students to excel beyond the limits of prompts and rubrics, which act as guidelines but cannot replace the presence of the instructor.

Christine L. Webster-Hansen, PhD, was recently the assistant dean of e-learning at Ocean County College, and now she serves as the Humanities Institute dean at Brookdale Community College.