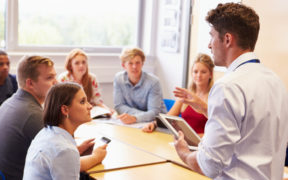 Reflections on Teaching
Make the Most of the Learning Moment
William A. Reinsmith March 30, 2020

It may happen only once in a 50-minute class. It may not take place at all. It may be days before it happens again. Then, suddenly there it is—a learning moment—that one instant in a ...

Editor’s note: The following article first appeared in the December 2003 print issue of The Teaching Professor. This reprint includes a postscript by Maryellen Weimer.

It may happen only once in a 50-minute class. It may not take place at all. It may be days before it happens again. Then, suddenly there it is—a learning moment—that one instant in a classroom when teacher and student(s) merge. Until recently, I would have called it a teaching moment. But with the recent shift to learning, the designation seems out of place. It hardly matters since they are the same thing. When the moment arrives, a space opens up, and the class is stilled. An insight is shared; a quiet wonder descends. The student sees or several of them do, if it’s a good day. Minds have been touched. The teacher glows inwardly. She feels her raison d’etre.

And then it’s gone, evaporated into thin air. A learning moment rarely lasts—at least not in undergraduate classes and never for the duration of a whole class. Even when it lingers, it cannot be controlled or charted or even reinforced. These moments of elusiveness and mystery cannot be captured and held, even by very experienced teachers. But those teachers take every advantage of their presence—they ride the wave for all it’s worth, for however long it lasts. It is this response that separates the artist in the classroom from the ordinary practitioner.

Many times in my long career, I have stumbled on learning moments unwittingly or failed to notice them until too late. As I improved my craft, I became more attentive to their presence, more willing to abandon my agenda and heed their call. I have never been able to make them happen, nor has any other teacher to my knowledge. We do the best we can to orchestrate a setting in which a learning moment might take place—just like Socrates did in his conversations with his fellow Athenians 2,500 years ago. But there are no guarantees. Even Socrates was unable to sustain the moment for long. Because of this he considered himself a failed teacher. Surely, this is too harsh.

How many of us have known the frustration of coming upon a learning moment near the end of a class session, hoping to continue the moment the next day, only to find nothing there but the husk of memory? We start again prosaically: “Well, if you remember yesterday we discussed . . .” But no magic ensues—nothing happens.

Most of the recent studies in educational journals attempt to measure the effects of learning (and teaching). This is especially true of assessment. While assessment is an important wedge against classroom incompetence, it can never touch the essence of deep learning, which is largely impervious to quantification. A learning moment erupts in its own time and place, on its own terms. A psychic space opens ready to be filled with new insights, enlightenment, and understanding. The alert teacher responds. Measurability becomes nothing more than a tracer sent after the fleeting event, the scaffolding erected around the geyser. It quickly subsides, leaving only the apparatus standing.

Over time, students can become quite adept at handling the apparatus of learning. They simulate spontaneity, take tests, work in groups—they know how the game is played. Far too many have built successful undergraduate careers (scaffolds) with these utilitarian skills. But few if any real learning moments erupt through this structure of academic success. Even skilled teachers may not be able to break it down once it becomes so permanently rooted. Still, learning moments do occur in our classrooms, somehow breaking through, and we should be on the lookout for their advent.

A good lecturer can model learning; a discussion leader may ask appropriate questions; a caring mentor can nudge a student toward self-confidence. But not even the most outstanding teacher can summon a learning moment. The most we can do is fashion a context for them. The ideal environment is one that avoids rigidity and fosters a sense of ease; where a certain lightness, even playfulness, reigns—an environment that is conducive to what Csikszentmihalyi has called flow. But even more important is our mind frame. We must stay open, keeping our minds nimble. Most of all we must learn to abandon what we thought was important and surrender to their serendipitous nature. Put succinctly, teachers (as opposed to one-way lecturers) must learn to live on the balls of their feet, expecting the unexpected. Then surprising things may happen in a classroom.

Though they have their place, we must not become obsessed with evaluation, assessment, testing—with the quantifiable—the scaffolding—lest we miss the magic moment, evanescent though it be. It is at the heart of learning, the simplex intuitus. The act of teaching, in its supreme moments, is larger than us. It becomes an act of allowance, an exercise of getting out of the way, of letting something work through us, taking its own directions. We tap energies whose original source and ultimate end no measuring instrument can calculate. I think we need to be reminded of this in an age of learning objectives, concept maps, and grading rubrics—the avalanche of paraphernalia that can obscure the very reason we are in the classroom.

In the late ’90s my institution decided to save money by putting classrooms on a reduced maintenance schedule. My classroom quickly become a mess—garbage can overflowing; bottles, wrappers, and (yes) paper cups scattered about; forgotten books, notebooks, and stray handouts here and there; chairs in disarray; chalkboards dirty; and a stuffy staleness that settled over everything. I started coming to class early so I could pick things up. One morning a student asked me why I cared.

“Something important happens here. We learn in this space. It needs to look like a space worthy of the activities we do in it.” I carried on about a piece a math teacher had written for The Teaching Professor and how he called classrooms “sacred spaces” because sometimes what’s learned in a classroom changes a person for life. The class listened politely but with doubtful faces.

One morning after the cleanup I noticed a broken desk in the back row. The tablet top was half off, twisted downward; one leg dangled off the floor. “What is that broken chair doing in here?” I asked to no response. “Will someone please put it out in the hall?”

Next class session a student pointed out, “The chair’s back.”

“I see. Please take it out. Learning isn’t broken; it’s a solid place to sit.”

But again the chair came back. I left a note for maintenance to no avail, and when I asked the building’s custodian to throw it out, he told me he couldn’t dispose of school property.

Finally, I made the students a proposal: “Anybody want to go with me to the dumpster?”

“Sure, sure.” And so the whole class followed me out the front door and around to the back of the building. As it landed in the dumpster a hearty cheer erupted. Back in the classroom, there was another discussion about space and how it influences behavior and shapes interaction. “Do you swear in a church?” a student asked. “Or sing hymns in a bar?” added another.

Several days later I received a letter from the dean reporting that I’d been seen throwing university property in a dumpster and had been accompanied by students. The letter served notice of that impropriety and forbade further destruction of university property. A copy of the letter was now in my personnel file, where it would stay permanently.

I read the letter to the class, partly out of anger but also because I wondered whether something might be learned here.

“So, what should I do about it?” Students straightened up in their chairs, hushed but attentive.

Then a student answered. “Nothing. We’ll take care of it.”

After class a group of students gathered around him, talking animatedly. There was more activity and discussion before and after the next class. Something was up. A few days later they gave me a copy of the letter they’d written to the dean.

“We endorse Dr. Weimer’s decision to throw out the chair. It was broken. Her concern about how our classroom looks comes from how important she thinks learning is and how she wants the learning space to look like important things happen it in. She has changed how we feel about classrooms.” From there it went on to discuss their objections to not having clean classrooms. The letter was signed by everyone in the class.

That chair became a learning moment that stretched across that course. It was discussed at length, sometimes in jest; they thought they might learn better in more comfortable chairs. They started seeing its many relationships to learning—boring courses where students carved in the chairs, rows of chairs that make the teacher the most important person in the class.

“I don’t sit in classroom chairs the way I used to,” a student observed on the last day of class, and heads around the room nodded, including mine.