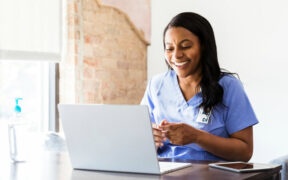 Labs are a common component in nursing courses. In our health assessment course at York University, students attend a two-hour lecture followed a two-hour lab, where they put into practice the concepts covered in the ...

Labs are a common component in nursing courses. In our health assessment course at York University, students attend a two-hour lecture followed a two-hour lab, where they put into practice the concepts covered in the lecture. The lab rooms are set up like healthcare facilities, and students take turns acting the role of a patent or a nurse and performing physical exams on one another under the eye of an instructor. The pandemic required that we move the laboratory simulations online, but we were surprised by how much a combination of digital and physical props could do to replace the institutional labs.

Both the lecture and laboratory components of the class were hosted in Zoom. For the lab, students paired up in breakout rooms to practice what they learned. To guide them, we provided each pair with a worksheet that described the patient’s situation and what the nurse needed to do. This guided both the student “patient” and “nurse.” The nurse interviewed the patient using the information provided, while the patient provided replies that were appropriate to their role.

Faculty facilitated the practice labs by entering the breakout rooms throughout the session and, at the end, providing feedback from observations while also answering any student questions. At the end, students also provided each other with feedback on their communication styles, techniques, and manner of probing for health queries.

While student responses over Zoom could easily handle the interviewing elements of the labs, the hands-on elements of the activities required a different approach. We simulated the inspection of the patient by providing students with images of normal and abnormal findings regarding each body system. Students were required to write all their observations down, then compare what they wrote with each other. Students performed the palpation on themselves, identifying in their worksheet how much pressure they were putting on themselves and how this might feel on a frail elderly patient or someone who was obese. They also applied different palpation techniques on different body parts, in each case indicating how this felt.

Students also demonstrated different processes to their instructors over Zoom. For example, students demonstrated on themselves how to examine lymph nodes by assessing their own head and neck lymph nodes in front of the camera, stating the name of the node and their clinical finding. A stand-up or tabletop mirror was used and found helpful by students. This allowed students to see themselves while they described techniques and findings that were normal and abnormal. Students started the respiratory assessment of the chest by using a plain T-shirt on a hanger from a door or hanging on the wall from a nail (no markings on the shirt—one solid color) and using masking tape to create the key landmarks needed for proper assessment and sticky dots to highlight such areas as lung borders and specific ribs. Students demonstrated on their T-shirts how to inspect; where to palpate and percuss; and how they would use their stethoscopes, where they would auscultate, and how they would instruct the patient to breathe with each auscultation. Each student worked with a partner and gave feedback on the techniques used and the landmarking provided. Students continued using this T-shirt for the assessment of the heart—with added landmarks made for the major heart valves. They verbally explained to the partner patient what they were going to assess, how they were going to do it, and what the partner patient might feel in the process of the assessment as one method of putting the process into practice with the limited fidelity.

When students were required to assess the abdomen, each brought a pillow to the session, draping a towel on both ends much in the same way a clinician drapes their patients when performing an assessment and only exposing that area that was been assessed. Again, students were directed to create landmarks on the pillow for such areas as the epigastric and umbilical and the major arteries, including the aorta, renal, iliac, and femoral. Students had to be able to verbalize and demonstrate all the elements of the assessment including appropriate introductions, hand hygiene, and consent for the assessment before they started the actual technique. Students observed each other going through each part of the assessment on the pillow-abdomen and provide constructive feedback.

Each pair was responsible for documenting their findings in a written format (we provided documentation templates to all students) and sharing their documentation with each other and faculty. Students practiced documentation of their findings and use their clinical judgement for future nursing actions. In pairs in the breakout rooms, they also demonstrated assessment of cranial nerves on themselves in front of a desktop mirror. Various charts and mnemonics were available as teaching aids for the students to use during the assessments. These aids were especially useful for such assessments as pain and skin assessments.

Student feedback was positive as learning was still effective and rich with active learning opportunities. It was surprising how much of a hands-on lab could be transferred online by a combination of acting, imagery, self-analysis, and use of ordinary objects to mimic body parts. It only required thought about what each lab needed and what ordinary objects could provide those elements. This demonstrated that with a little ingenuity, digital props provided by the institution and physical props found around the student’s home could adequately substitute for an institutional lab.