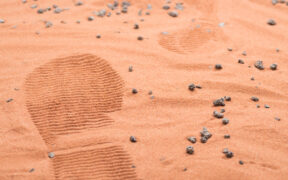 Many institutions are experimenting with virtual reality (VR) to provide students with simulations that apply their theoretical learning to practice. We developed a VR experience, adapted from Joyner and Allen’s (2015) case study “Farming in ...

“Mars is there, waiting to be reached.”
—Buzz Aldrin

Many institutions are experimenting with virtual reality (VR) to provide students with simulations that apply their theoretical learning to practice. We developed a VR experience, adapted from Joyner and Allen’s (2015) case study “Farming in Space? Developing a Sustainable Food Supply on Mars” and inspired by the film The Martian, in which students establish a base on Mars and grow crops to sustain life. Not only does the simulation teach students to think creatively about how to create a sustainable farming system in a hostile environment, it also teaches vital “soft” skills that all lab workers and scientists need, such as teamwork and communication.

We developed the simulation with Arch Virtual, which develops VR content for a variety of organizations, including Madison College’s Center for Excellence in Teaching and Learning. Arch Virtual uses Acadicus to host its simulations, which can be viewed in two ways: in a fully immersive VR experience using a headset or on an ordinary computer in “viewer mode,” where students navigate a 3D environment similar to Second Life using their keyboard and mouse. We opted to use viewer mode rather than virtual reality headsets, which would have taken a semester or more to procure, to facilitate a swift project launch in the interest of offering students an engaging assignment during the transition to emergency remote teaching.

We were initially skeptical about viewer mode’s ability to engage our students until we played around in a virtual office environment ourselves. It was great! Viewer mode activated our visual, auditory, and tactile senses. We had fun exploring the office, trying to communicate with each other, and finding each other’s avatars so we could demonstrate interesting parts of the environment that we discovered—especially elements that we could click on and interact with. Even when one simply stands by and watches another avatar explore an environment in viewer mode, it is still an interactive experience. The team can communicate about where they want the avatar to go and what they want it to do, much like those who might stand by and advise and interact with someone playing a video game, albeit virtually.

We first put students into teams of four, designating one person as the astrobiologist whose avatar would interact with Acadicus to explore Mars for their team. This was because Acadicus requires certain computer specifications to be downloaded and to run well (they’re listed on Arch Virtual’s website), and we were not sure how many students had systems that met the requirements. Thus, we surveyed students about their computer systems, and those who met all the requirements were eligible to become the astrobiologist. The rest of the team participated in the project using the Blackboard Collaborate (BC) videoconferencing system. We chose BC because our college uses Blackboard as its learning management system; students would need an account to log on other virtual platforms, which adds another layer of complexity.

To view Mars, everyone met in BC, and the astrobiologist shared their screen so that all could see Mars in Acadicus. This solution allowed everyone to participate no matter what kind of online access they had. Students could even participate by using their phones. In the future, we can have on-campus students use campus computers that meet Acadicus specifications or procure VR gear so that everyone has uniform access to the Mars environment. We could also encourage students who can’t come to campus to order one of Madison College’s free laptops and hotspots so they have access to a computer that meets specifications.

How does the Mission to Mars Project assignment work?

Once teams were formed and the astrobiologist designated, the teams started meeting in BC to run the simulation. Each student on a team was assigned a mission role via virtual dice roll or group discussion of roles. The roles were mission control, colony manager, agricultural advisor, and astrobiologist.

Next, we gave the teams a series of tasks, such as finding their base, determining where to place their colony infrastructure, and selecting and justifying the crops and agricultural practices that would result in a lasting and sustainable Mars colony. Joyner and Allen’s “Farming in Space?” project explains the advantages and disadvantages of the various crop selections.

When the mission was complete, students reported on the “Farming in Space?” portion of the assignment and also reflected on their experiences as botanists on Mars who role-played in a team that relied on group communication in VR to carry out their mission.

What did we learn from our students’ experiences?

Technical difficulties—such as installing and using Acadicus, using Blackboard Collaborate, and arranging to meet simultaneously with project teammates—were a problem. All teams were eventually able to overcome these issues and complete the assignment, but there were certainly moments of frustration that students had to work through. It is important for faculty to recognize that students will confront these issues in the project and be prepared to work with students as they solve problems.

On the positive side, we find that most students enjoyed the activity and were able to identify specific learning outcomes. Overall, students enjoyed the role-playing aspect of the Mission to Mars Project as well as the innovation of using VR to create a Mars environment for students to explore in Acadicus. One student wrote that, “It added reality and immersion to the experience and made it easier to get into character for the role play.” Another student added, “The idea of virtual reality in Mars is awesome. I wish that we could actually build or design in Mars to make it even more realistic.” It is clear that the project was popular for its fun and innovative aspects.