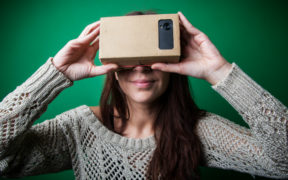 Virtual reality (VR) has evolved from a technology of the future into a practical educational tool for students to interact with the world in ways previously not possible. Many K–12 and college courses use free, ...

Virtual reality (VR) has evolved from a technology of the future into a practical educational tool for students to interact with the world in new ways. Many K–12 and college courses use free, off-the-shelf VR apps, such as Google Expeditions and Google Earth to explore global landmarks, Lifeliqe to learn about human biology, and Tilt Brush to sketch or paint in three dimensions. Wearing a VR headset immerses the viewer in a world that they might never see in person or one that exists only virtually.

In the TalkTech project, a collaboration between my Information Technology 101 course at Bentley University in Waltham, Massachusetts, and Diana Andone’s Technology of Multimedia course at Politehnica University of Timişoara in Romania, students go one step further: they work as members of international teams to create scenes that share uses of VR in their home countries with their international partners.

Both courses focus on developing digital literacy skills. In the TalkTech project, we wanted to see how our students would work together to learn about VR, and we hoped that by creating their own examples, they would learn about VR as a technology as well as how different industries use it. Through this project, students increase their digital literacy skills, experience the challenges of working in a collaborative global environment, and gain insights into the culture of their partners’ countries.

A goal of the project is for students to compare how similar businesses in each country operate, which they do by having teams from each country create a VR tour of the same type of business and share it with their international partners. Students visit business locations—such as shopping malls, museums, coffee shops, train stations, sporting venues, and concert halls—in their own countries; take 360-degree photos; and create a collaborative VR scene that includes images from both locations and provides a button to “teleport” between them. They demonstrate and discuss their work using online communication tools of their choice.

The project simulates a global working environment akin to what students might experience in their eventual careers. The challenge for students from both countries is to complete a project with team members from another country, whom they likely will never meet; manage a seven-hour time difference; carefully navigate language and cultural references to communicate effectively; and determine which apps and programs are best for managing the project. When should they use email or discussion boards, messaging apps or video conferencing tools? How will they share files and establish meeting times? They already use Skype, Facebook Messenger, WhatsApp, and other communication apps in their personal lives; this project requires them to figure out how they might use these tools professionally.

Students create their own VR scenes using CoSpaces, a web-based creative platform for developing VR experiences. Most develop their scenes on their laptops by importing original 360-degree photos into the CoSpaces editor and adding avatars, gestures, and dialogue to tell a story about the locations they researched and visited.

The Romanians and Americans on each team share a common CoSpaces project when developing their scenes. They interact with their scenes by viewing them in a browser or with the CoSpaces mobile app.

In this example, clicking an animated avatar in a 360-degree photo outside of a Starbucks in the US (Figure 1) transports the visitor inside, where they can see a dialogue between two customers discussing beverage choices and spin the scene around to see the décor (Figure 2).

Figure 1. Outside an American Starbucks

Figure 2. Inside the American Starbucks

Clicking the Christmas tree in the coffee shop in the United States teleports the viewer to a Starbucks in Romania (Figure 3).

Figure 3. Inside a Romanian Starbucks

After interacting with the Romanian scene, clicking the logo on the wall returns the visitor to the US, creating an almost seamless experience.

Figure 4. Left- and right-eye images for an immersive, 3-D viewing experience of the Starbucks

Steps for creating a scene in CoSpaces

After visiting the scenes created for them by their international partners, team members discuss similarities and differences using VR technology to guide the experience. Our students learn firsthand how collaboratively creating and sharing VR scenes enables them to better appreciate the business applications for VR in many settings. They also get a taste of their international partners’ communities and cultures.

While some of our students have experienced VR before, mostly through playing VR games, creating their own VR examples is new to all of them. They are empowered when they realize they can create VR on their own.

For more information about the TalkTech Project, please visit http://talktechproject.net.