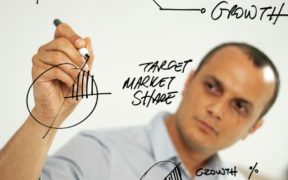 Educational research has established that learning is more effective when it combines visual and audio, known as the Modality Effect (Reiser & Dempsey, 2012). This combination reduces cognitive load, which allows the learner to retain ...

Educational research has established that learning is more effective when it combines visual and audio, known as the Modality Effect (Reiser & Dempsey, 2012). This combination reduces cognitive load, which allows the learner to retain information more effectively. We decided to create educational videos for our math classes using a highly engaging technology called a lightboard. A lightboard allows instructors to speak to the camera while writing on a clear glass in front of them, thus avoiding having to turn their back on their students to write.

But, the reader might ask, won’t this cause the writing to be backwards to the online viewer? The genius of the lightboard is that it reverses the image either by pointing the camera at a mirror set at an angle to the speaker or with editing software. The result is a presentation that preserves eye contact with the audience while allowing the instructor to write formulas, make drawings, or sketch out other things during the video. This remarkably simple system will transform educational videos at any institution.

We decided to order the complete system through one of the suggested retailers on the lightboard website, but it is possible to build your own studio with the helpful directions on that site. Besides the basic equipment that is part of any studio—camera, lights, and microphones—the setup requires a large piece of glass and either a simple mirror to bounce the camera view off or the use of editing software such as Adobe Premiere Pro to reverse the image after the shoot. Most institutions already have a studio set up and editing software, so the only specialized equipment they will need is the glass and maybe some additional lights.

The recording process is pretty straightforward and not that much different from what a professor would normally do during a lecture, minus the students. The instructor simply speaks to the camera and draws on the lightboard as he or she would during a lecture. We found that it only takes an hour or more in the studio to record multiple lessons.

After recording, a videographer edits the video. One nice feature of this process is that video editors can insert graphics into the video at various parts of the lecture. If the instructor wants to refer to an image, he or she can just do so by pointing at an imaginary image while speaking and the video editor will seamlessly insert it into the video afterwards.

After having used a lightboard for some time now, we have developed a set of best practices for getting started.

Our lightboard is currently being used for video presentations in a wide range of disciplines such as mathematics, engineering, chemistry, communications, and even an Italian language course. While the original innovators used the lightboard for STEM courses, we have found benefits for using it outside of STEM. The lightboard allowed a communications professor to draw concept maps while explaining them. The Italian-language professor used the lightboard to write vocabulary words while emphasizing the punctuation, syntax, and accent marks. These are great benefits for students to learn through dual channeling techniques, that is, instruction that is both spoken and written at the same time (Reiser & Dempsey, 2012).

Our goal now is to incorporate different techniques such as integration with physical objects, interactive quizzes, and augmented reality in conjunction with the lightboard. For inspiration, we look to examples showcased on the lightboard webpage as well as the Because Science YouTube channel.

Kristina Schmid is an instructional designer, Eddie Gomez is a video production specialist, and Peter McCandless is an assistant professor-in-residence at the University of Nevada, Las Vegas.